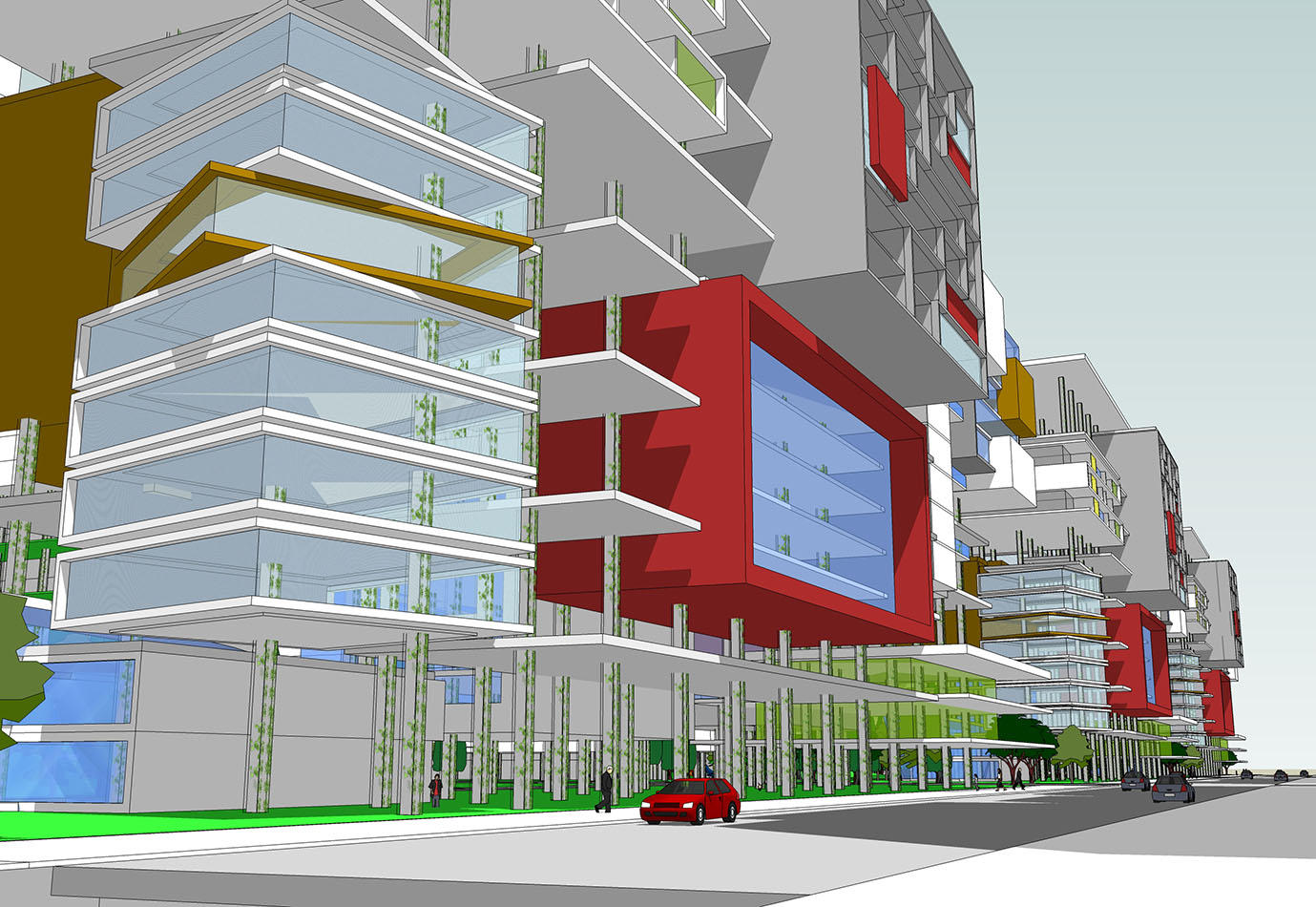 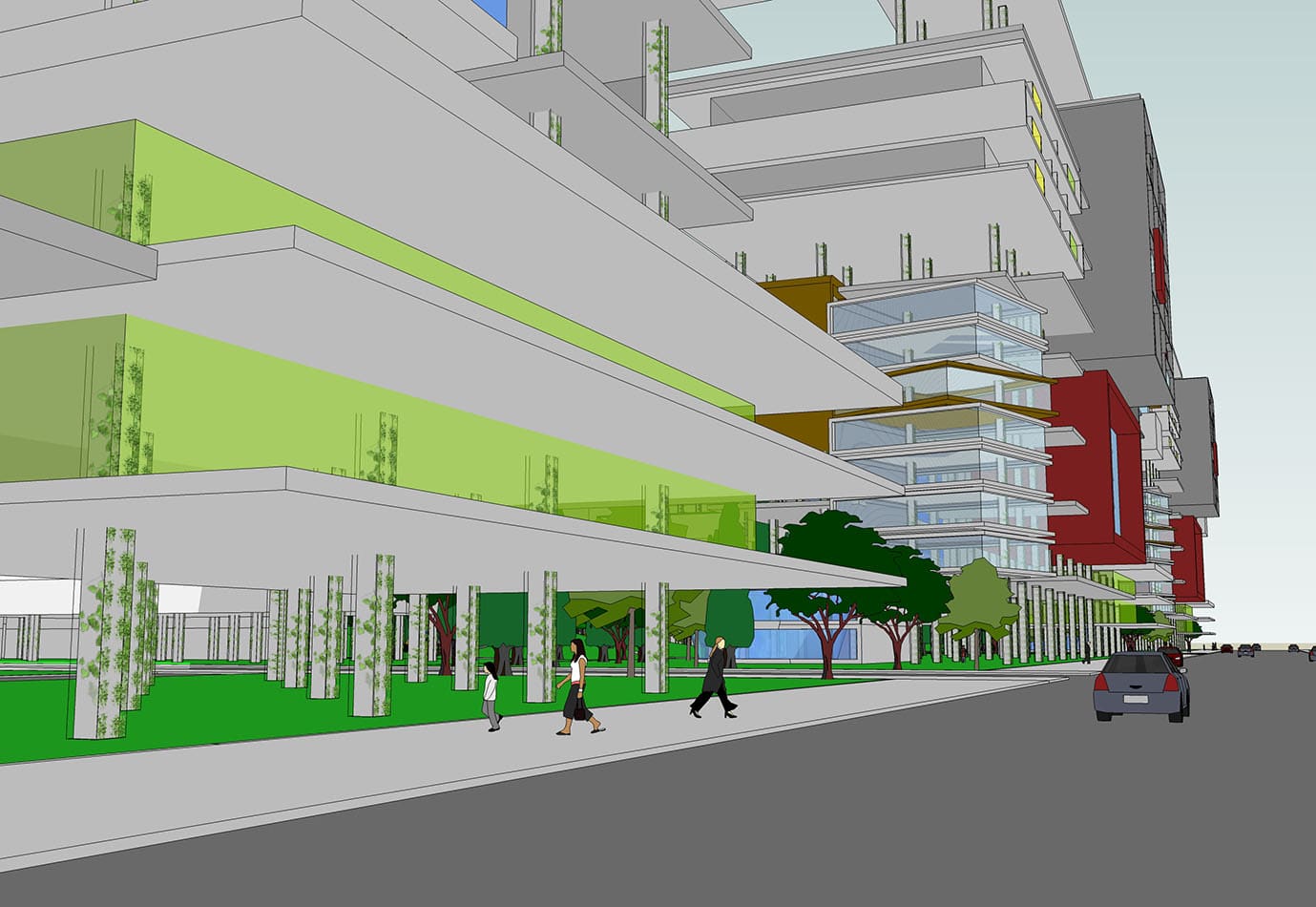 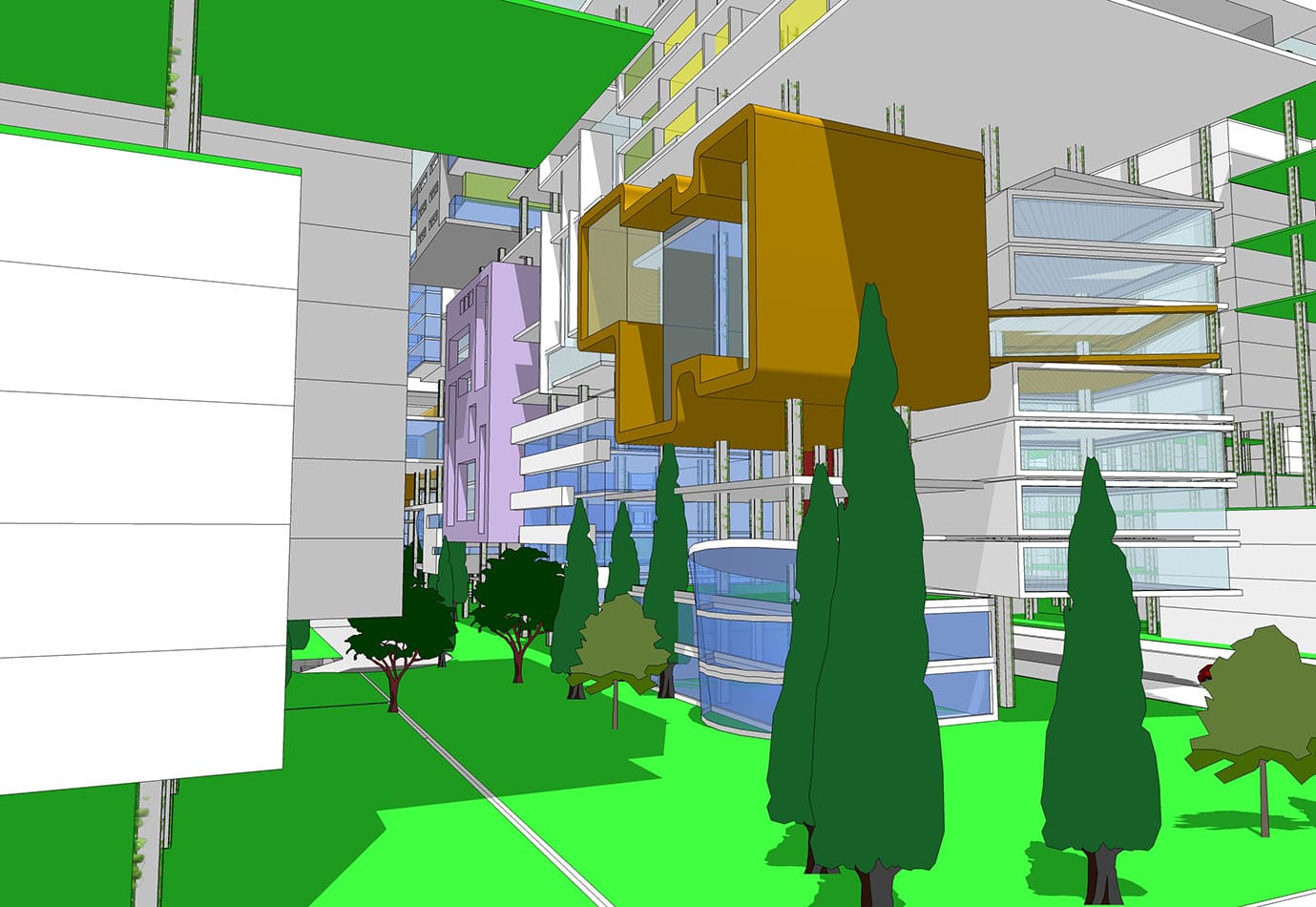 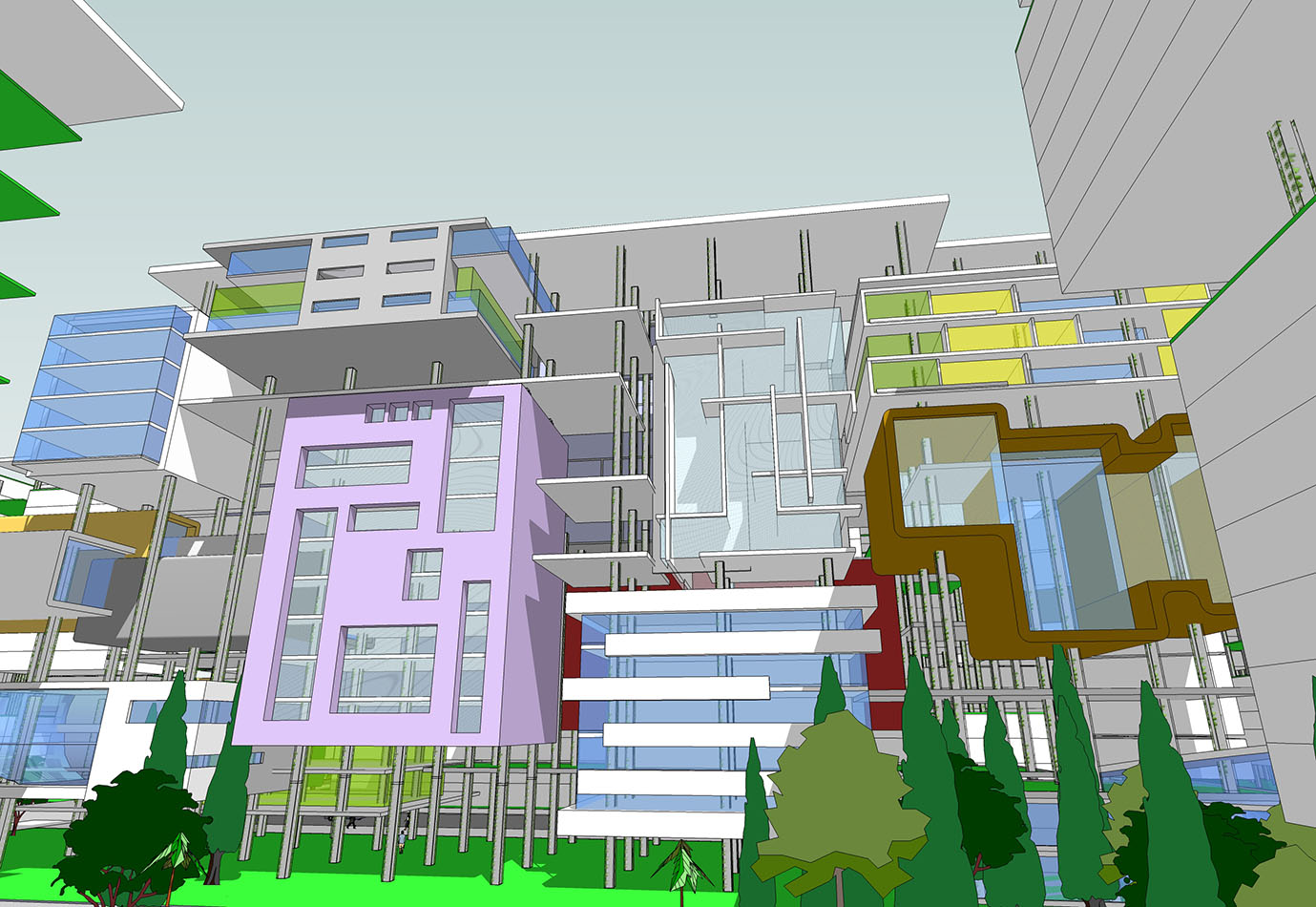 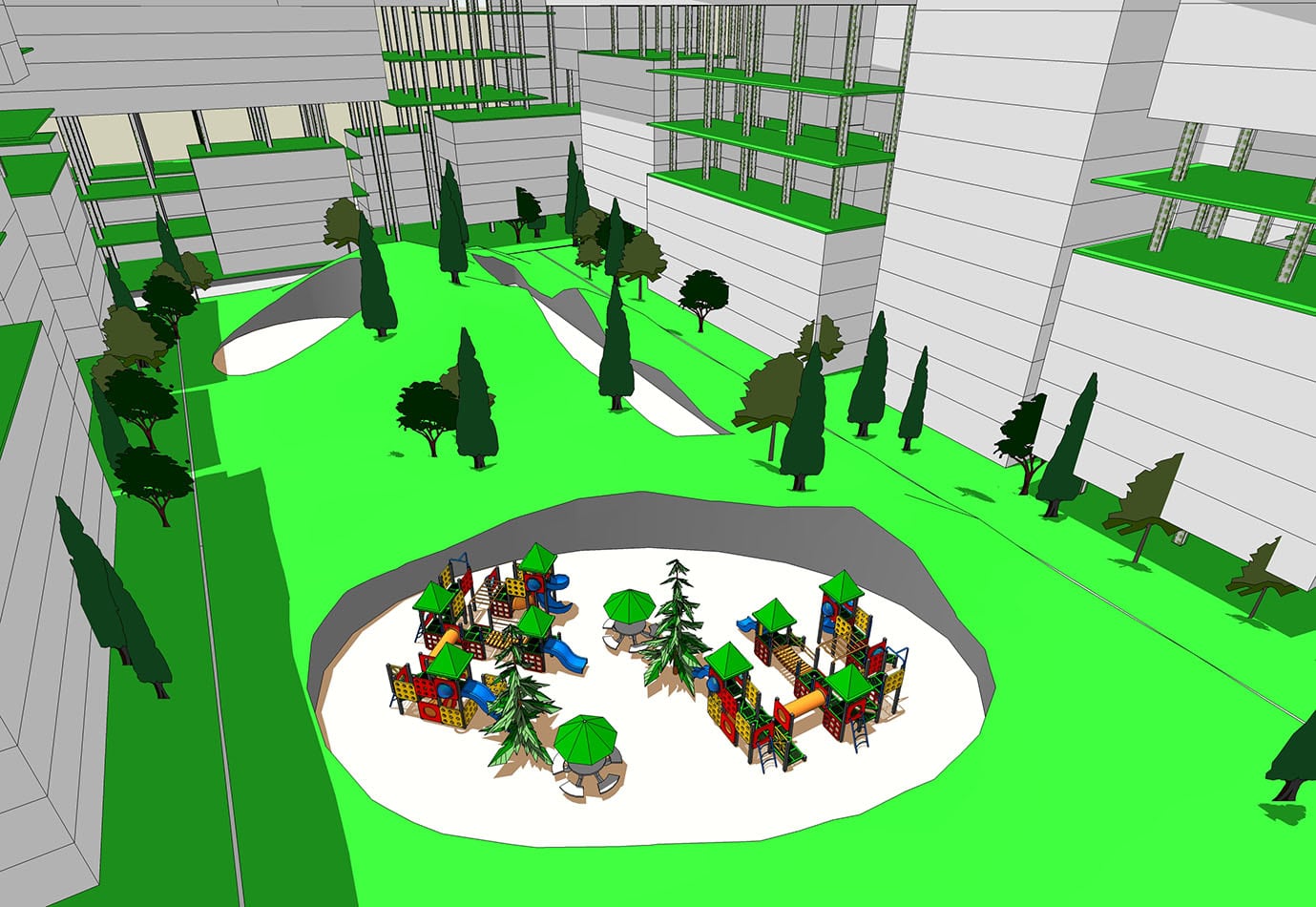 As a result of the success of the modernist movement of the 20th century, the urban planning of modern cities almost all over the world features the same concept of zoning, especially in many underdeveloped societies and underdeveloped countries. The basic proposition of this zoning approach is that within the city separate areas should be designated for different functions, and as a result almost every city is divided into a downtown, business districts, residential areas, industrial areas and commercial areas. The modern city is totally dependent on transportation systems and people spend too much time commuting from the home to the workplace and to the commercial and entertainment neighborhoods. In a global city with a large population this arrangement is no longer successful. In addition, due to global warming and an environmental crisis on the one hand and a global shortage of resources on the other we can no longer afford to implement the urban strategy of zoning, and new ideas must be introduced in the planning of the sustainable contemporary city. One of the most welcomed proposals is the introduction of mixed-use program into the building. Thus, meaning that residential buildings should no longer be separated from office buildings but rather should engage the concept of a single building that can offer the population a complete life, a multifunction building which can combine housing, work, education, commerce and so on.

The Superblock is a neighborhood which combines multiple functions within one building, a combination of smaller blocks with various purposes into one superblock offering a diversity of functions for the benefit of the residents.

In the Superblock, one can leave ones home and within a short distance, by way of the elevator or the staircase or even a green corridor or elevated garden, go to his office; or drop off his children at their classroom on the 6th floor by way of a garden plaza and then meet his friend in a coffee shop on the 4th floor overlooking the city or the Superblock’s inner garden. This lifestyle minimizes by far the need to commute, and the need to create endless freeways and infrastructure in a city that cannot finance or maintain them.

The Superblock offers the opportunity for a new kind of social life, and for interactive activities within the Superblock’s community, the members of which have a mutual interest in developing and maintaining their Superblock and even competing with the other Superblocks which compose the city. The Superblock can be thought of as an economic unit that can generate products or services for the benefit of its tenants and can create its own cultural identity and activities. The Superblock will be like an urban ship floating in an armada of ships forming altogether an ocean city in a global composite which is beyond nationalities, traditions, religions and any ancient limitation or stigma. The Superblock will be the zone of the free man, free in society to define their identity, their culture and their destiny in a world of ambiguous crises and conflicts.